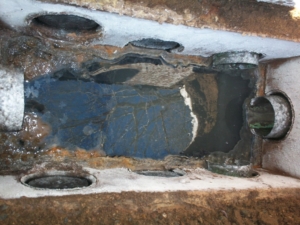 We performed two title 5 inspections today and had two entirely different outcomes.  The first was a 12 year old system (picture shown) which passed with flying colors.  There is a little scum build up in the d-box (very normal for its age) but the water levels were perfect with no signs of previous backups.  This system passed the title 5 inspection.  The second title 5 inspection was on an 18 year old system that was a clear failure.  The water level was over the outlet pipe in the tank, this is a clear indication something is wrong with the outlet pipe or the d-box.  We opened the d-box very carefully and just as we expected once the cover was removed the hole quickly filled with water and we had to put the cover back on immediately.  Since the septic tank is overfull, the pressure from the excess water flows quickly into the d-box once the cover is removed.  This all equals and automatic failure and unfortunately a few upset homeowners.