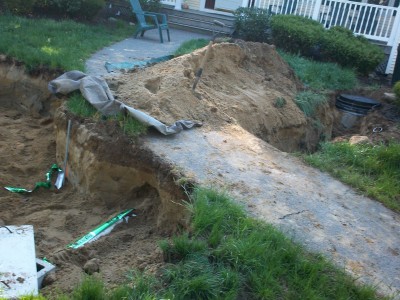 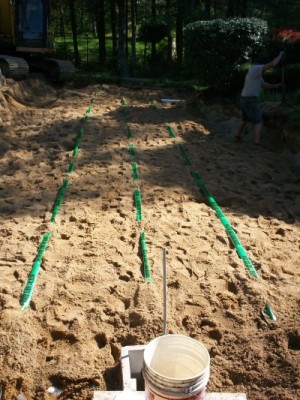 Still running way behind on getting some of our more recent projects up here but nonetheless I’m trying to chip away at it. Hopefully we’ll be caught up by winter.

These pictures are from one of the two septics we installed over on Garrett Dr. in Norton about a month ago. Can’t beat doing two systems back to back when the houses are a stones throw away from each other, not going to get an easier machine move than that. Great sandy material already in place in the front yard but (of course there always has to be a ‘but’) there was one silty layer that was only about 6 inches thick that had to be removed. Doesn’t sound like a big deal but it was four feet down so all the good sand had to come out and that one skinny layer had to be trucked out, then all of the good sand had to be brought back in. Of course we could have just made one big pile in the front yard but whenever possible we try to disturb the least amount of area and grass as possible. In the end everything went well and the homeowner was pumped, especially because of the fact that we tunneled under his walkway to install the new pipe from the tank and didn’t cut up the walkway as originally planned. More work, yes but an estatic homeowner, also a yes.